This post is not about throwing a pity party for myself. It’s more about the beautiful mind of a child and the profound things they surprise us with. I actually had a pretty good day. I played catch up most of the morning. Listening to music, catching up on replies and planning the day with my computer (along with my revolving stash of handwritten notes) is certainly a favorite activity of mine. Soon it was time to get ready for spending the rest of the day with some good friends and family.

We took my niece to see a play. It was probably her first live theater experience. Here she is talking up her wishlist with the Santas. I believe she asked for a Barbie, amongst other things of course! 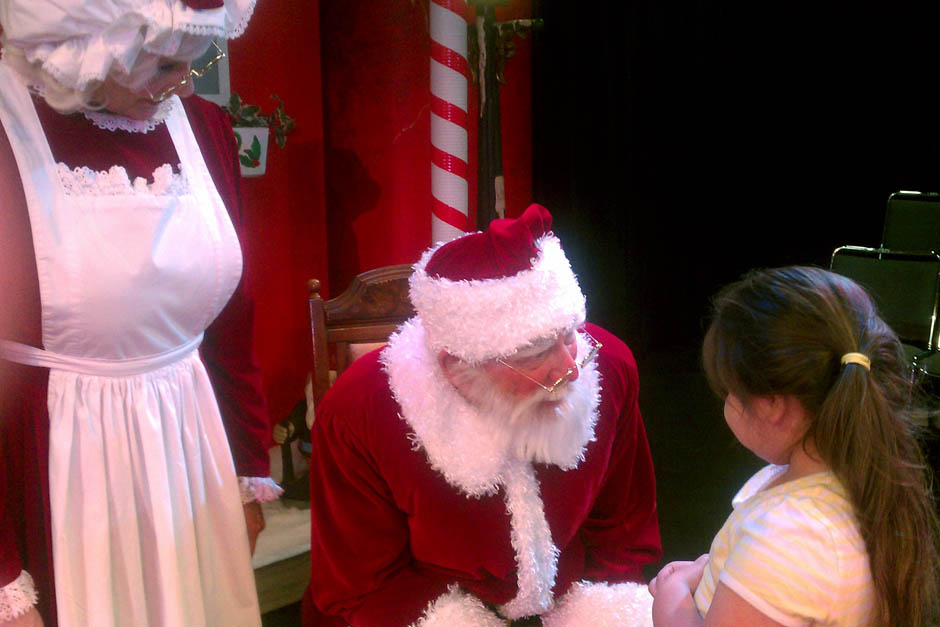 After the play we grabbed a bite to eat at a sushi restaurant. She’s a very picky eater but I figured chicken teriyaki is a safe bet with kids. Wrong. She did go for chicken but it was basically a dish of breaded chicken strips. She loved the white rice too. This gave her some major energy.

She was bouncing off her booster seat the entire way home. This was no short ride either. I don’t think I could have turned up my radio loud enough to cover her voice. I didn’t necessarily mind but half an hour of that kind of energy can get tiresome. Eventually we made it home safely.

We were all back at my place. I fired up the television and got some music videos going. I went upstairs to perform a quick check of things and feed my kitty. I am a pretty organized dude but you never know when your underwear might like to make a guest appearance. Everything was pretty much where it should be except for my bed. It was kind of half made. I heard the unmistakable sound of my niece running up the stairs. She walked in my bedroom just as I was pulling the covers over the right hand side pillow, completing my 10 second bed making operation.

“Uncle, who sleeps there?”

“What do you mean, this is where I sleep, that’s my bed.”

“No! Who sleeps there, where you just covered up the pillow?”

Oh gosh, I thought…she sees two pillows and thinks that it means two people sleep there. My mind drifted in to so many places at once. Would I simply say that the number of pillows don’t matter…a don’t-worry-about-it-kid kind of explanation? I then remembered that I committed to honesty after a recent, painful experience.

“Fun-futch-ly what?” she asked, waiting patiently for me to finish.

“But uncle, then who’s going to take care of you?” she asked, with genuine concern in her eyes.

Fuck. I completely melted inside. Without missing a beat, she went from trying to pronounce the big word I had just spoken to that. Just try to imagine a little 5 year old asking you that and you can probably see why I had no response. I might have said “I don’t know baby,” but I can’t be sure. A better answer would have been that I was slowly learning to take care of myself, to define myself again.That’s not exactly material to share with a child though, is it?! It didn’t really matter. She had made my night and continued to bounce off the walls promptly thereafter.

Later in the evening I played guitar and sang to my niece and her mother. It was a rare moment…too rare of a moment for a musician to be having actually. I need to do that more often.

I’ll leave you all with a song I shared with them. Everything about this song is simply beautiful. I hope you love it as much as I do.