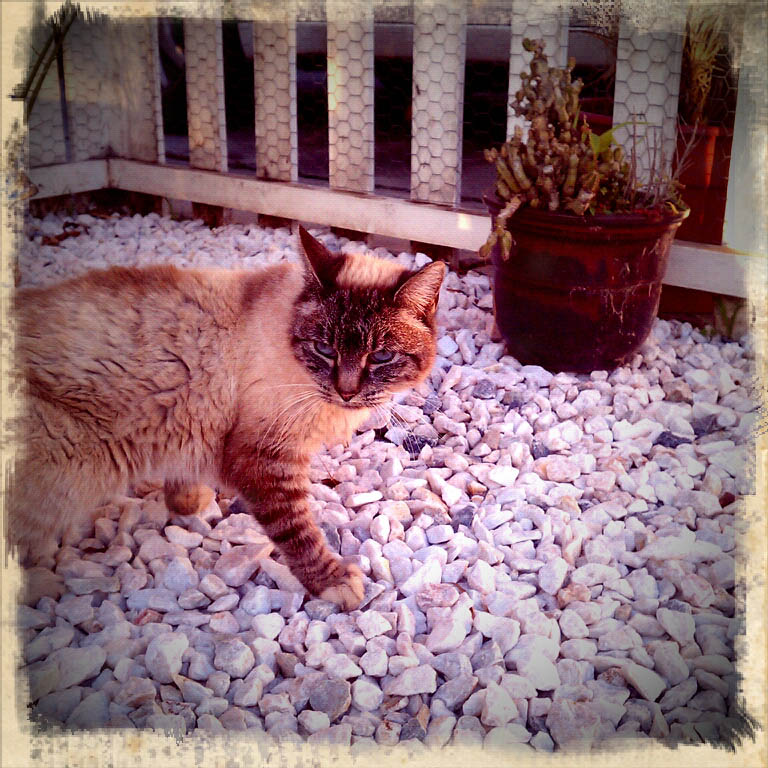 CC was an outside cat. Feral would be a more accurate description but that always sounded so cold to me. Earlier this week I had to come to terms with the fact that she’s not coming back. I won’t see that sweet little face again.

CC was one of many outside cats I have had the pleasure of caring for over the years. She was very special to me for many reasons. Before she was trapped and spayed with the help of Lifeline for Pets she had at least one litter, possibly two. She outlived all of the other outside cats in the neighborhood, including her own offspring! Life is tough for an outside cat but CC was tough as nails. She is probably the mother to my very own Shadow who lives with me now. I was able to rescue Shadow early but CC and the others could not be handled. Eventually I was able to pet CC while she ate wet food. It was a treat for both of us. On the whole, though, she was pretty wild.

Somehow, though, she managed to be a very personable cat. She was pretty vocal about her mealtimes. Sometimes she just wanted to say hi. Here she is being silly in the morning as I left for work. Is that a plant? Looks like a bed to me! 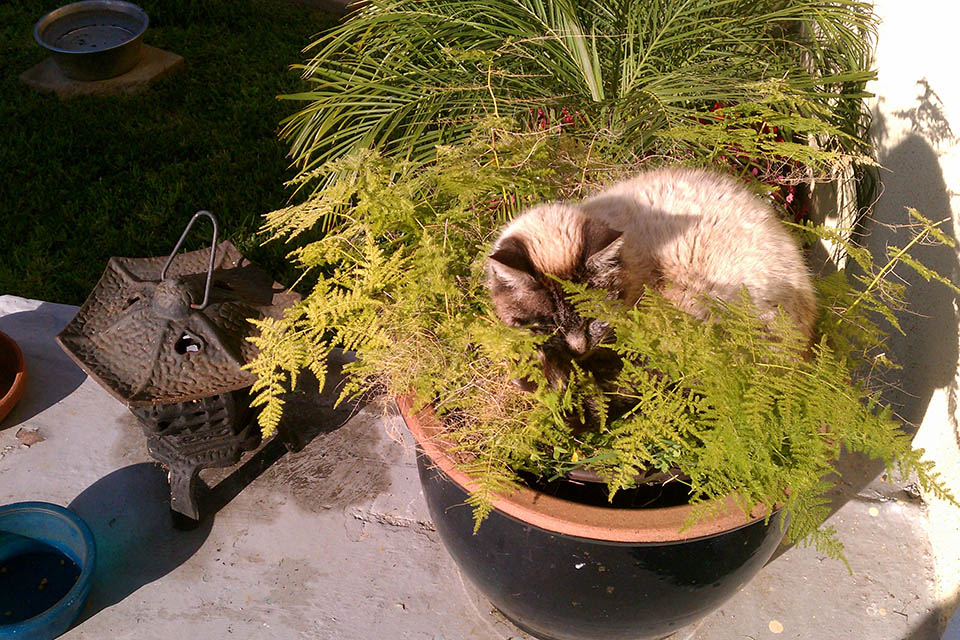 I don’t remember a lot about where she came from. She was just kind of there one day. My girlfriend at the time and I just started to feed her and her kids. They needed a home and we were willing to provide food, water and shelter. There is one thing that could never be forgotten about those early days, though. One of her back legs was sticking out in the most horrid manner.

When she went in for her spaying, the vet informed us that the leg could not be saved. It had already set. The best thing for her was to amputate it. Hence CC. Cripple Cat. We never called her Cripple Cat. It’s just where the name came from. It just stuck. She certainly didn’t let it stop her from climbing over the fence and catching birds. Kids passing by were fascinated by the three-legged cat. 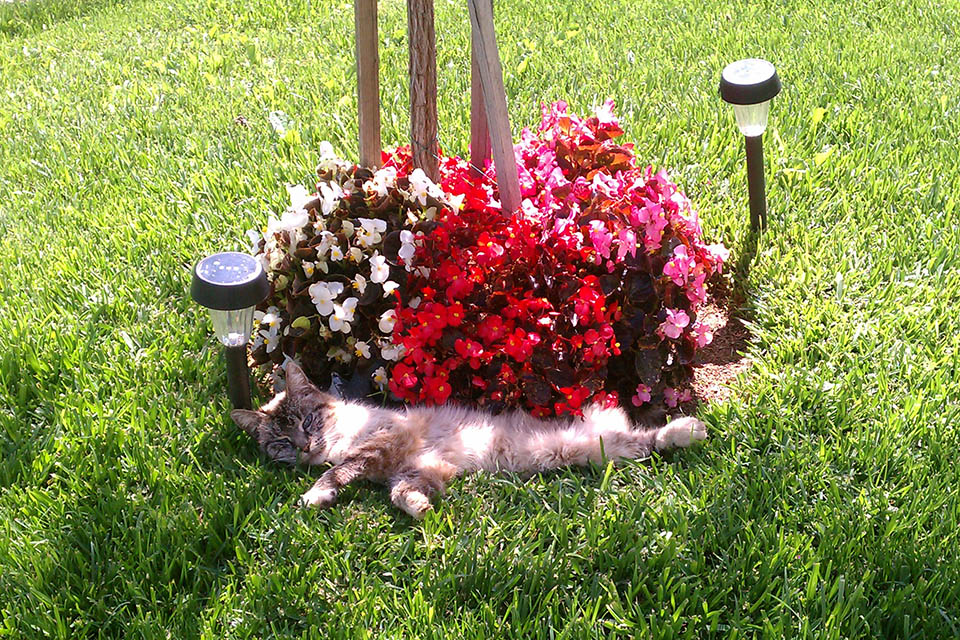 CC would leave me with an everlasting memory in a very difficult time in my life. Early in 2012 I was moving out of the home I had lived in for over 10 years. This was her home too. I still wanted to take care of her but she was wild. I couldn’t take her with me. I decided that I simply had to ask my landlord to continue caring for her. He agreed. That was a relief! It wasn’t easy to hand her over like that. I felt like I was abandoning her. It turns out I didn’t need to worry.

There was a most fortunate detail to all this. I lived directly across the street from my parents’ house. To make the transition easier I moved many things there before moving them over to my new place. After all was said and done I reluctantly took over her food to my former landlord and thanked him for agreeing to care for CC. He wouldn’t have to feed her one single time.

CC followed me to my parents’ house!!! This little wild cat somehow knew our time was over in that old place. She transitioned over from one day to the next. She never crossed the street back to our old house ever again. It was the most incredible gift. I was so happy. It was unbelievable. My dad is not a cat person but I think even he was a little touched by what she had done. My parents didn’t have too much of a problem caring for her while I transitioned over to my new place. Of course, I visited her often and did what I could to keep her comfortable.

She was an old girl now. I bribed her with that wet food and cut off all her matted fur one day. I am very grateful that, during what would be her last days, she was seen escaping the rain under the porch, on top of her crate that I had just cleaned up for her. I had shaken out her blankets and made sure there were no spiderwebs to bug her. This was one of the last shots I captured of her: 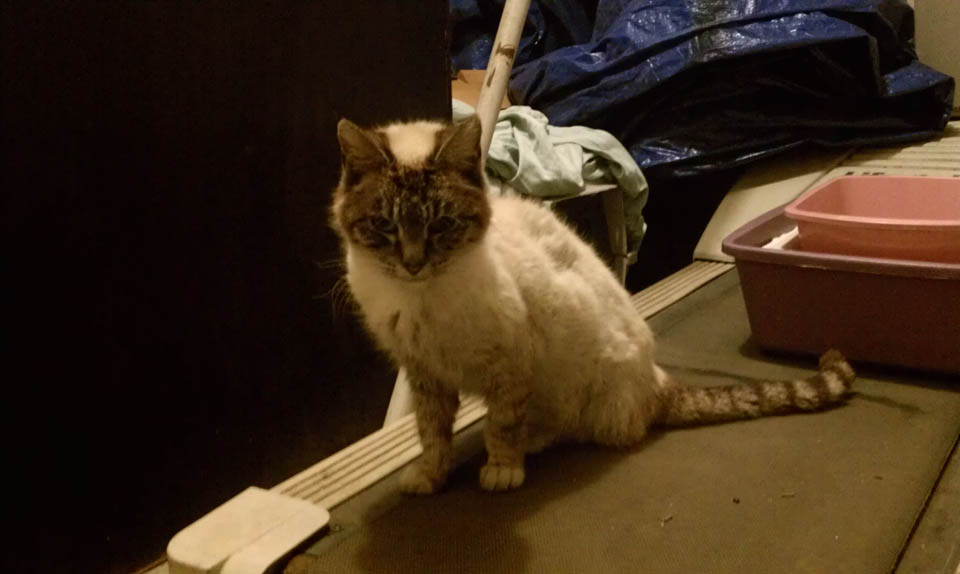 It should also be noted that she was quite the pal with my baby Pepper. Here they are doing their thing at the old place (you probably need to be on Facebook to see this video):

Pepper gets a little impatient there but believe me, they were buddies. Sometimes they would chase each other around the yard. CC would always seek Pepper out and butt her head against her. At my parents’ house I would play ball with Pepper and CC would come out to hang out with us in the sun.

What happened to her? I really don’t know. My mom informed me that she had simply disappeared from one evening to the next morning. She fed her on a regular schedule and knew exactly when she went missing. Like her daughter Little One, I still haven’t been able to find her body. My heart tells me she is gone.

I hope she has crossed that Rainbow Bridge. I hope she is resting peacefully. Thank you for all the wonderful memories CC. I miss you.