I can’t remember exactly when I began to consider myself a coffee drinker. Sure, I drank it here and again. I was also a sucker for those ice blended drinks that Coffee Bean and Starbucks make. I didn’t need it on a daily basis, though. The caffeine really affected me. I’ll never forget the day I went to Starbucks and the cashier asked me if I wanted a double espresso shot. I said, “Sure, why not?” Soon my heart felt like it would pound right out of my chest. It was kind of scary. I’ve never done that again! I’m going to guess that around 3 years ago that all changed.

It was all around me at work yet I was never really tempted by it. I actually took a little pride in the fact that I didn’t drink it. At one point, though, I remember feeling so damn tired. My mornings were dragging along in a very bad way. Maybe I was just bored at the time, maybe I wasn’t sleeping well. Whatever it was, I had to do something and coffee seemed like a safe enough alternative. I would stop being a healthy rebel and join my fellow coffee drinkers.

Soon I started to have it every morning. I finally understood two things. First, there was a feeling that coffee provided. It wasn’t simply the energy boost I had used it for in the past. This was a happy feeling. A pick me up. I brain booster. I was now writing a significant amount of SQL and coffee made a lot of sense. I had graduated to supreme nerd status writing code with my coffee in hand. That brings me to my second point. The workplace encourages coffee drinking because it makes you more productive. Caffeine is a legal drug as far as I’m concerned. I’m sure someone out there has figured it that it’s much cheaper to provide caffeine for their employees than to let them be sleepy and dim-witted. The Dunkin’ Donuts work provided was tasty enough but soon this became like beer.

I was excited to try finer beans just like I love to discover new, delicious beers. Now let me be clear, nothing reigns supreme over my love for beer but the process was similar. I still have a lot to learn about coffee. So far I have tried some pretty good stuff like Illy, Stumptown, Larchmont Bungalow and  Intelligentsia but this one is my favorite at the moment: 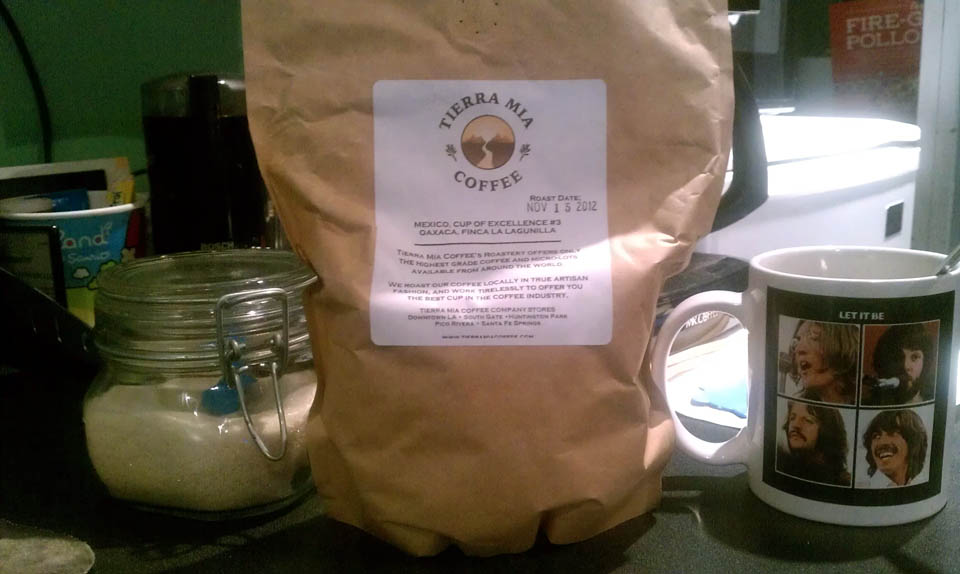 That’s Tierra Mia coffee amongst my coffee kit at work. That’s real raw cane sugar in the jar baby! I don’t usually do creme or milk either. I like it just sweet enough. Anyhow…this is their Oaxaca, Mexico roast. It’s a very earthy flavor, almost chocolatey. Mmmmmm! I’m not versed enough in this stuff to describe it better than that. I discovered this place quite by accident. I was at the library with my niece and it was right next door. I just walked in and took a chance. It was worth it!!!

This reminds me that I’ve been wanting to try one of these contraptions:

To close, I would just like to say that I actually don’t drink coffee every day anymore. I do enjoy it a couple of times a week but things haven’t been regular at work lately and that’s when I get in to the daily groove. I actually rarely have it on the weekends. Is it merely a coping mechanism for work? Are the weekends inherently easier therefore the caffeine is not needed then? Hmmmmm…